San Siro Stadium is the massive sports stadium located in Milan Italy. It is home to the A.C.Milan and Inter Milan football clubs.

With a seating capacity of over 80,000, San Siro is one of Europe's largest stadiums. It  has hosted both the FIFA World Cup and European Cup final matches.

In addition to soccer games, the stadium is also used for music events of all sorts. 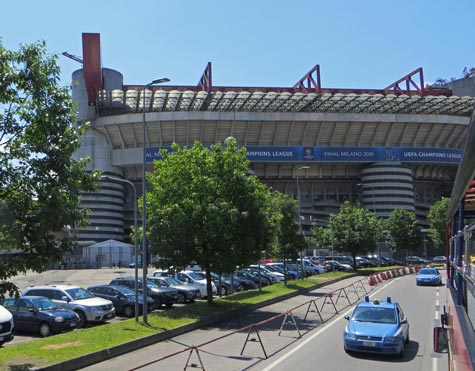 The San Siro complex is one of the most easily identifiable city landmarks.  The building is home to a museum that focuses on the history of the AC Milan team.

Visitors to Milan Italy can access the stadium via two Milan Metro stations: San Siro Stadio and Lotto.  In addition, there is a hop-on hop-off bus stop located right at the stadium entrance.